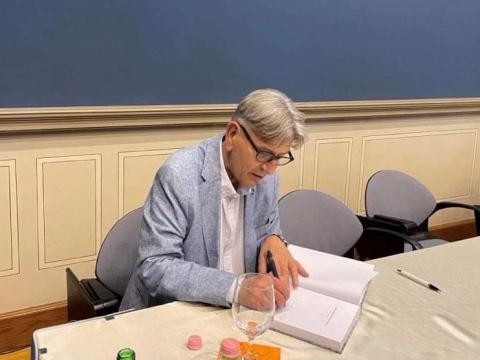 A two-volume Liber Amicorum was compiled for the 70th birthday of Professor Károly Bárd honored by almost 70 colleagues, friends and students in recognition of his scientific work. The acclaimed professor is a very special person. The books themselves testify to the fact that Professor Bárd is recognized and respected by legal scholars and practitioners, attorneys, human rights groups, former and incumbent dignitaries both in Hungary and abroad, irrespective of their specialization. His professional competence is uniformly recognized by his peers, regardless of their views on criminal policy or political issues in a broader sense.

The anniversary volume was modelled on the genre of the German Festschrift, with the authors presenting their latest and most original ideas in their contributions. The volume spans the work of several generations of lawyers: from the greetings to the reader by 101-year-old Professor Tibor Király to Károly Bárd’s doctoral students who not only successfully completed their SJDs, but have since shown considerable professional success.

The first volume comprises the studies written in Hungarian, while the second volume contains those written in English and German language. The rich academic life of Professor Bárd is summarized in a retrospective interview, reproduced in both volumes. Following the introductory contributions presenting the professional work of Professor Bárd, the studies in the first, Hungarian language volume, centre on four major topics: The studies in interdisciplinary legal theory, criminal policy and criminology refer back to Károly Bárd’s work of 8 years in the government beginning with the transition after the fall of the Hungarian socialist system, where he played a significant role in developing criminal policy at the Ministry of Justice. His professional goals included the gradual modernization of criminal law, including the reform of the rules on juvenile offenders. In academic circles, Károly Bárd is considered one of the first to have formulated the goal of establishing a reasonable and humane criminal policy in Hungary following the change of political system and to curb excessive criminalization. In his first book, a groundbreaking work in procedural dogmatics, he explored, among other things, the possible application of social sciences to criminal justice.

The chapter comprising studies from the area of substantive criminal law are also a reference to Károly Bárd’s codification work, since he played a major role in both the amendment of the Criminal Code in 1993 and the codification of the Criminal Code at the time of the Gönczöl Committee. He also participated in the preparation of foreign penal codes, such as the Russian and the Albanian criminal codes. In the United Nations Office on Drugs and Crime (UNODC) he took stock of, and analysed the signatory states’ crime prevention strategies.

The most important work of Károly Bárd lies at the intersection of criminal procedure law and human rights. As co-chair of the codification committee, he took part in the drafting of the 1998 Code of Criminal Procedure, took the lead in drafting an amendment to the Penitentiary Decree, participating also in the preparation of foreign criminal procedure codes, such as the relevant Albanian law. At the European Institute for Crime Prevention and Control affiliated with the United Nations (HEUNI), he authored a discussion guide on non-prosecution in Europe. Both his second and third monograph are dedicated to the subject of criminal procedure: his thesis on the right to a fair trial was published in Hungarian and English in 2007, as was his doctoral dissertation discussing the conflict between victims’ dignity and defendants’ rights from a comparative perspective.

The part of the anniversary volume dedicated to human rights recalls the fundamental rights work of Károly Bárd. In UNODC, he also dealt with the broad topic of judicial independence; served as the Hungarian member of the European Commission against Racism and Intolerance (ECRI) and worked as an expert of the Organization for Security and Co-operation in Europe (OSCE). In Hungary, together with Tamás Bán he examined the compatibility of Hungarian law with Strasbourg case-law, ensuring compliance through specific proposals, later working as an agent for Hungary before the European Court of Human Rights and the UN Human Rights Committee. For many years he worked as director of research at the Budapest Constitutional and Legal Policy Institute (COLPI), later, he headed the human rights program of the CEU’s Department of Legal Studies.

Studies on two other major topics were also included in the English and German language volume: international criminal law and processing of the past. As early as 1988, as a Humboldt scholar in Germany, Károly Bárd began working on the subject at the Freiburg Max Planck Institute for Foreign and International Criminal Law, before turning his attention to the European Convention on Human Rights and fair trial. In 1998, he participated in the Rome Diplomatic Conference, which resulted in the adoption of the Rome Statute and then in New York in the codification of the ICC rules of procedure and evidence. He assisted several countries in preparing the constitutional and legislative steps necessary for the ratification of the Rome Statute. Attempts at the processing of the past appear in the Zétényi-Takács draft bill on delivering historic justice, as well as his writings on the ‘firing squad law’, his scholarly work on retroactivity and more recently, his articles published in the quarterly Múlt és Jövő (Past and Future).

The final major topic of the English and German language volume is rule of law. As a long-standing external expert of the OSCE, Károly Bárd was recently consulted on the Polish judicial ‘reform’. The subject of his two expert opinions: the restructuring of the Polish Supreme Court and the Disciplinary Council have since come before the Court of Justice of the EU. He also contributed to several judicial reforms abroad, such as the restructuring of the judiciary in Georgia, Kazakhstan, Italy and Tunisia.

The launch of the Festschrift took place on Europe Day, the 9 May 2022 at the Hungarian Academy of Sciences. The event was chaired by Professor Csilla Lehoczky-Kollonay, and Professor Bárd was lauded by Professor István Kukorelli, Dr. László Kéri, Professor Balázs Gellér, Dr. Erzsébet Kadlót, and Professor Violeta Besirevic. The edited volumes were presented by Dr. Aleksandr Khechumyan. The launch of the Liber Amicorum was followed by a reception at the Hungarian Academy of Sciences.

Volume I - table of contents