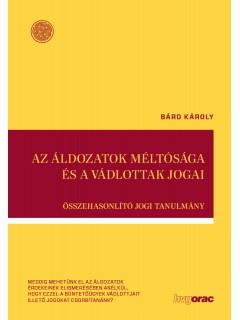 As a brand-new release Professor Károly Bárd’s book came out in the first days of March 2021. In the book written in the author's native tongue and titled ”Victims’ Dignity and the Rights of Criminal Defendants- A Treatise in Comparative Law” Professor Bárd elaborates on a few themes such as the potentials and limits of approximation of laws, the future of the common law-type jury,  the role of emotions in decision making and criminal justice guarantees like the presumption of innocence or the principle of favor defensionis in national and international criminal trials.  In the center of the analysis of each theme is the immense challenge of reconciling victims’ justified interests with the criminal justice guarantees designed for reducing the risk of wrongful conviction.