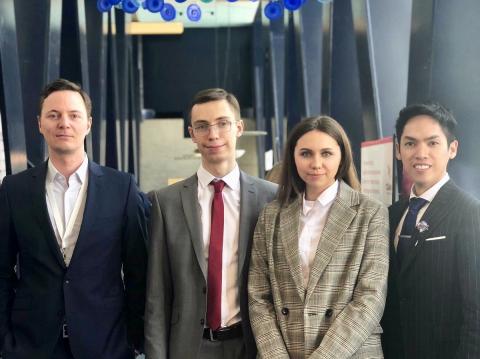 Six months of intense preparations have proved fruitful for this year’s Vis Moot Team as they made CEU history by qualifying to the Round of 16 elimination rounds in the 26th Willem C. Vis International Commercial Arbitration Moot. The international competition brought together 372 universities from 87 countries to the city of Vienna for the oral rounds held from 12-18 April 2019.

The team likewise participated in three pre-moot events – the 11th Prague Pre-moot held on 30-31 March, the 12th Belgrade Pre-moot on 6-7 April, and the 7th Budapest Pre-moot on 9-10 April.

Recalling their experience in the competition, the team recounts:

German Y. Derbushev – “It was my first time participating in the Vis Moot and the oral rounds proved to be the most challenging. We participated in a number of pre-moots, including the Prague and Belgrade pre-moots, which gave us all great development opportunities. I thank my teammates for their commitment.”

Sofiia Kostomarova – “Willem C. Vis Moot was a challenging but extremely rewarding experience. We learned to be convincing advocates and gained skills that we will certainly draw upon in our future legal careers. We got a chance to be guided by a dedicated coach, met distinguished professionals in the field of international commercial arbitration and made friends with passionate law students from all around the globe.I am proud to share this achievement with the most enthusiastic teammatesand grateful for all the support from our IBL program classmates and staff.”

John Albert Laylo – “This year’s Vis Moot Team definitely beat the odds with the best finish in the university’s history of participating in the competition. Despite having only one set of oralists, the team proved its mettle and ended up being victorious against teams that have historically fared well. I am grateful to German and Sofiia for their unfettered commitment, enthusiasm, and dedication in all the rounds, Professor Petsche for his valuable inputs during and post-practice sessions, and to our classmates in the IBL program and CEU for their unwavering support to the team.”