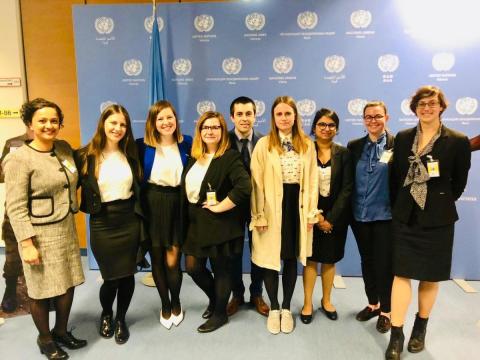 By participating in the MUN, our students gained an insight into the work of a UN diplomat and the functioning of the UN’s central human rights body, the Human Rights Council. The students enhanced their public speaking and negotiation skills, expanded their practical knowledge about global affairs, and enriched their research and policy analysis capabilities.

This year’s MUN session was focused on two current pressing human rights issues: the human rights situation in Yemen and the Rohingya crisis in Myanmar. The students – coached by Professor Sejal Parmar – prepared position papers representing assigned delegations in a realistic manner, and then defended and negotiated their interests and policy positions with other delegations.

The states assigned to CEU’s teams were the following:

At the end of the session, all delegations voted for the best performance by a delegation. The winning CEU team was that which represented the United Kingdom. This is how that team’s members, Agnieszka Januszczyk and Darija Zeljko, described their experience:

“Having participated in the MUN Conference for the very first time, it was a valuable and memorable experience for both of us. Overall, the MUN was a fantastic opportunity for enhancing our negotiation and speaking skills and increasing our knowledge on perhaps the world’s most pressing human rights issues. The day was filled with intense debates, negotiations, and it provided us with a greater insight into how the ever-relevant considerations of realpolitik and human rights play into the work of the UN Human Rights Council. We were very pleased and humbled at receiving the best delegation recognition and would like to extend our gratitude to the CEU Department of Legal Studies, and in particular Professor Parmar, for encouraging and facilitating our participation”.

The MUN also added to the skills-based training students receive at CEU. Maria Rumbol and Magdalena Wilczynska emphasized that the MUN developed their skills as human rights lawyers, in particular. They said:

"We are grateful to CEU for the opportunity to participate in this year's MUN, and to Professor Parmar for her help in our work. Our participation has helped to improve our vocational skills and versatility, as well as to cement our knowledge and awareness of two very current and challenging human rights situations and of the role of the UN human rights institutions more generally."

The representatives of the Austrian Delegation, Martina Bosak and Shambhawi Paudel also recognized the importance of dealing with the issues at hand in a realistic and diplomatic manner. They said:

“The task of proposing solutions to some of the most complex human rights issues felt richer at the location of the United Nations Office in Vienna, where we it was easier to immerse ourselves into the role of diplomatic delegates. It was great how easily we gravitated towards our allies and called upon countries to negotiate in order to find a common ground that we could reach consensus on or most of us could agree with. The whole day was intense, but it was also fun.”

The delegation of the United States reinforced how the MUN should the relevance of the merger of the theoretical knowledge acquired at CEU’s Human Rights Program and the way politics work in the Human Rights Council in practice. In words of Agostina Allori and Taras Leshkovych:

“We both took the course UN Human Rights System at the beginning of the academic year with Professor Parmar, where we discussed extensively the role of the Human Rights Council and its potential and challenges to secure the protection of human rights. Being in the UN Office in Vienna allowed us to put in practice all the knowledge we had developed and to understand by first-hand experience how global alliances and politics shape responses to human rights violations”.